Between The Dark Seas And Living Hell

Women refugees from Sundarbans, the world’s most vulnerable climate hotspot, are trapped in a nightmare

Between The Dark Seas And Living Hell

Women refugees from Sundarbans, the world’s most vulnerable climate hotspot, are trapped in a nightmare. 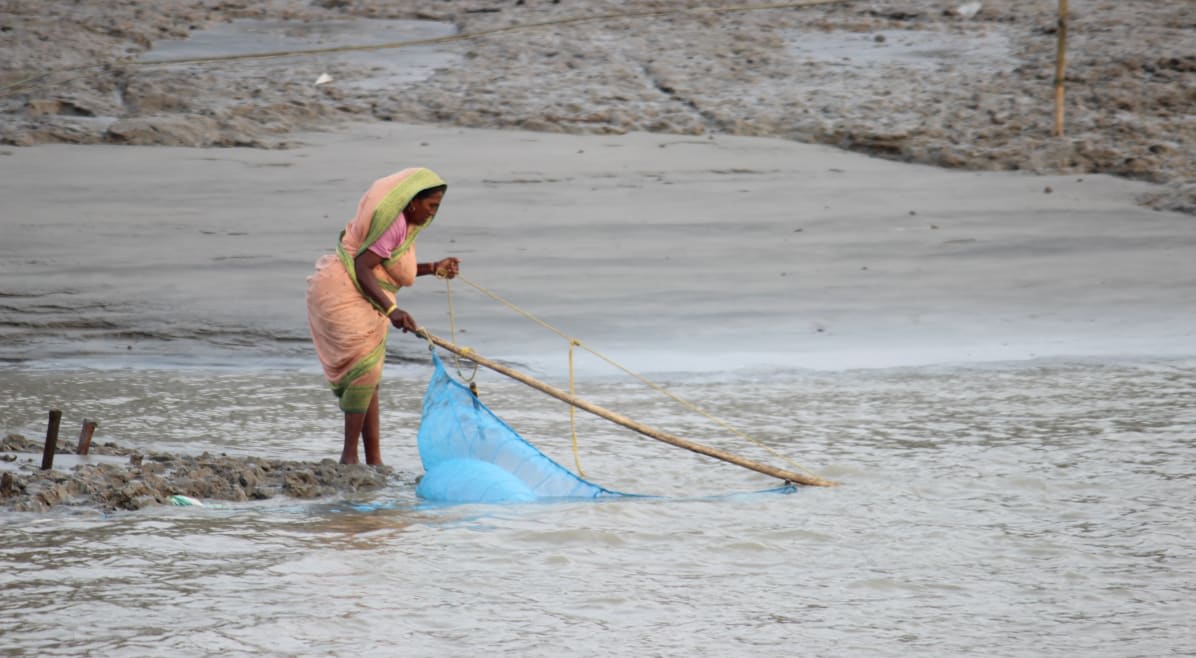 When the dark waters from the floods unleashed by cyclone Aila rushed into her house in the summer of 2009, Dipali made a desperate scramble with her five children inland, towards safety and survival. When the water subsided, her home had been washed away.

From her marooned island village in the Kakdwip subdivision of West Bengal's Sundarbans, Dipali sought refuge in Kolkata with her children, joining millions like them who arrive in the city every year, in pursuit of employment and survival.
She sought jobs in domestic or construction labour, leaving her children with her mother, the only surviving person she calls family. Her husband had died in 1998 due to illness.

To sustain her family of six, she took up daily construction jobs wherever she found an opening. The first time someone approached her for sex work—a mistri (foreman) who she was helping with a painting job—she immediately refused. "But as I struggled to find enough daily jobs to feed my children," she said, speaking in Bengali, "I finally gave in."
Every year, the number of refugees in Kolkata's Red Light District with stories like Dipali's, is rising. Around 7,000 people work in the district, and 600 to 700 hundred workers join the industry annually, according to Dr. Smarajit Jana, an epidemiologist who works with Durbar Mahila Samanwaya Committee, a collective that fights for the rights of sex workers. During the year Cyclone Aila hit, there was a 20-25% increase in the number of sex workers moving to the Red Light District, he added. Many of them, in interviews with HuffPost India, referred to themselves as "bhasha" (flooded) people. 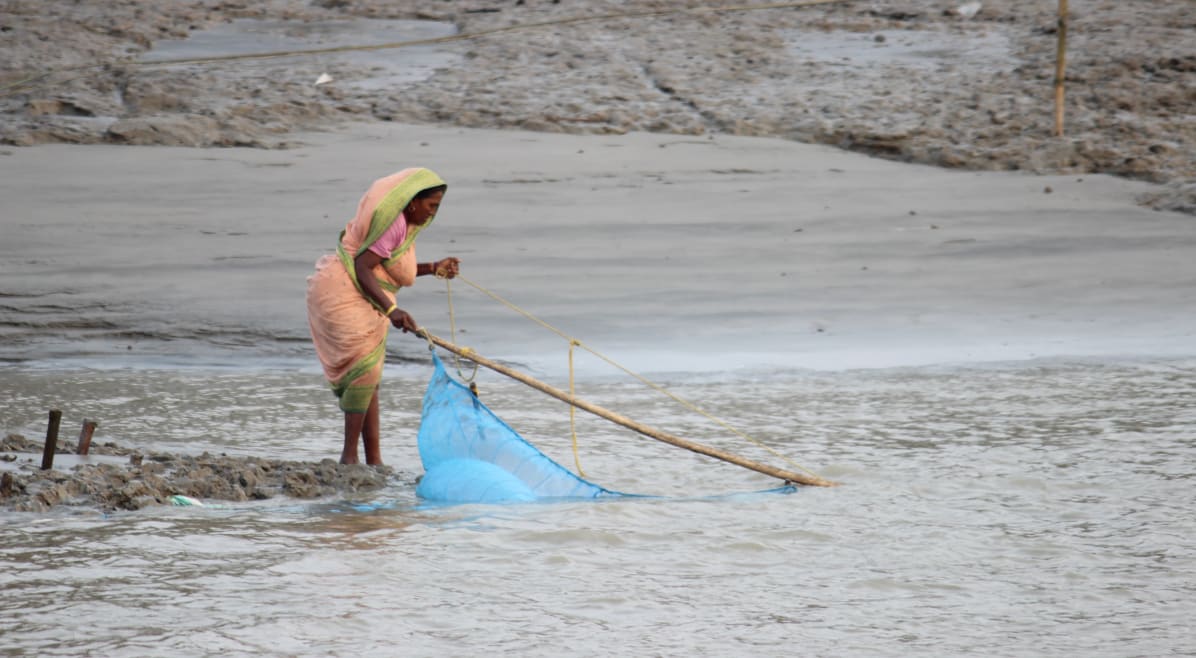 While there is rising recognition of this pattern and its problems, there is little information about how many women are being displaced by extreme weather events, experts say. This represents a major challenge because the Sundarbans, where Dipali is from, is one of the world's great climate change hotspots. It's a ticking time bomb that could one day be the ground zero for the greatest mass migration in history.

The Sundarbans is a network of islands in eastern India and Bangladesh where the river Ganga's deltas meet the brackish Bay of Bengal. It is spread over an area eight times the size of New York City and is home to as many as 5 million Indians and 8 million Bangladeshis—that's 13 times the entire population of Ottawa, Canada's capital city. All of them are at risk.

For decades, rising global temperatures have accelerated glaciers melting into the oceans. As with many other parts of the world, rising seas are slowly submerging the Sundarbans, while violent storms batter the region. This is pushing the region's huge population out of its home. 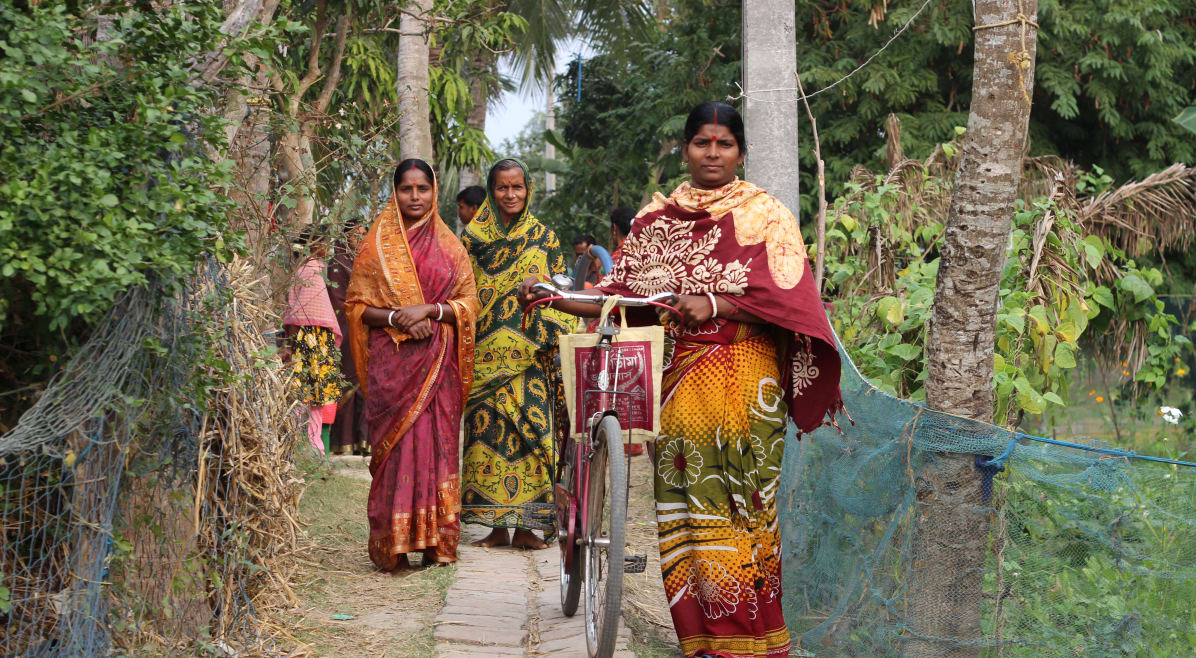 Every year it gets worse. Warmer temperatures make cyclones and hurricanes stronger and more devastating, while warmer oceans release more moisture into the atmosphere. This leads to heavier rainfall—and heavier flooding. In the Sundarbans, the seas are rising more than twice as fast as the global average, reported the Associated Press. According to the Centre for Science and Environment, much of this region could be underwater in the next two decades.

The suffering is palpable. The Sundarbans is the world's largest mangrove ecosystem, part of which forms a UNESCO World Heritage site. The forests are a natural barrier for the coastline, protecting it from violent storms. But as they are slowly engulfed and destroyed by human development, the region becomes increasingly vulnerable. The islands' inhabitants have few places to go as traditional ways of subsistence in the region, like farming and fishing, become impossible.

The only thing holding back the water is a mud embankment. Human development has weakened already vulnerable coasts. Every year, chunks of the 3,500 kilometre mud embankments collapse, and every year they are repaired with fresh mud.

The embankments are only a temporary solution—eventually, the islands will sink beneath the ocean.

"If all the Sundarbans go under water, in the worst case scenario, and all the people move out [of the region], that would be the biggest migration in the history of humankind," said Tapas Paul, a senior environment specialist with the World Bank, to HuffPost India. He was referring to the 13 million people who live in both the Indian and Bangladeshi sides of the Sundarbans. 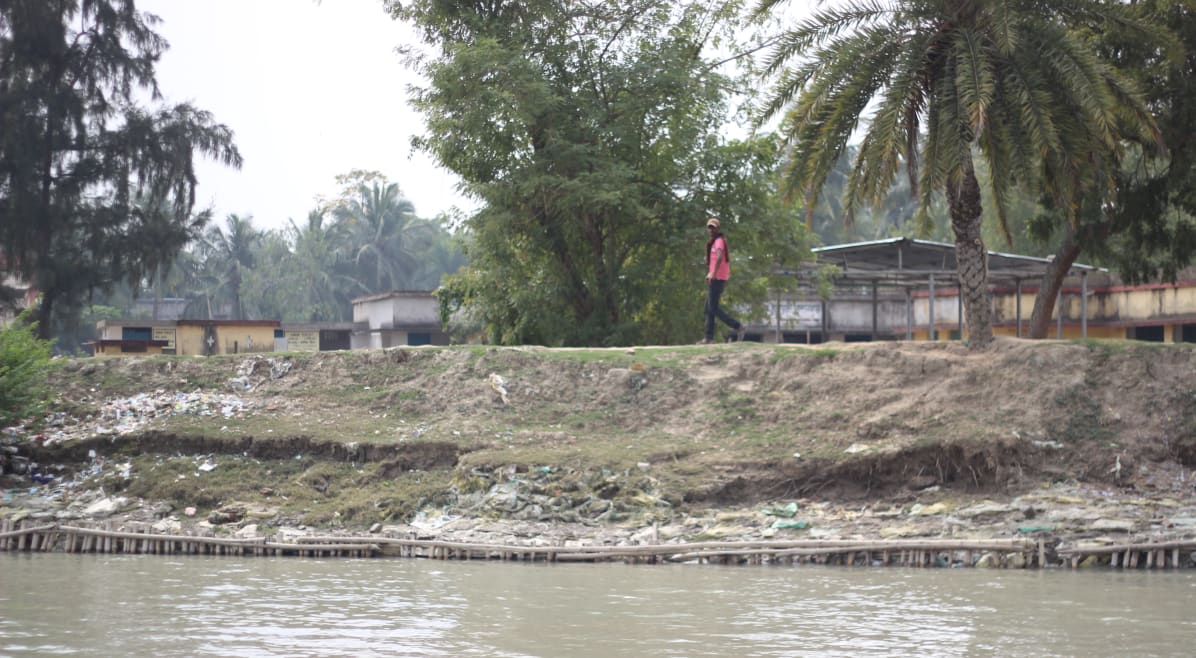 Dipali's is among the many villages in the Sundarbans that has been washed away over the years. The Indian Sundarbans has lost 9,990 hectares in recent decades. Already, a disputed island between India and Bangladesh sunk in 2010 and almost half of Ghoramara, an island with a population of around 5,000 people, has disappeared.

When Dipali returned to her village a few months after the Aila, her home had become unrecognisable. Her house was completely washed away by the cyclone, and animals had raided what was left. "Salt water had taken over everything. There was no farming," she said in Bengali. "It was hard to find work there anymore."

In any one given place in the world, this is the highest concentration of people at risk... The Sundarbans is a place where climate refugees are already a fact of life.


Sahiba Bibi lives on the shore of Mousuni island, less than 25 kilometers from Dipali's village. She pointed to a solitary fishing boat that bobs in the ocean about 200 metres away. That's where her house used to be two decades ago. Now, it's all water. Her family has moved inwards—and rebuilt their homes—five times since then. "But the water follows us," she said in Bengali, explaining the multiple breaches in the embankment. 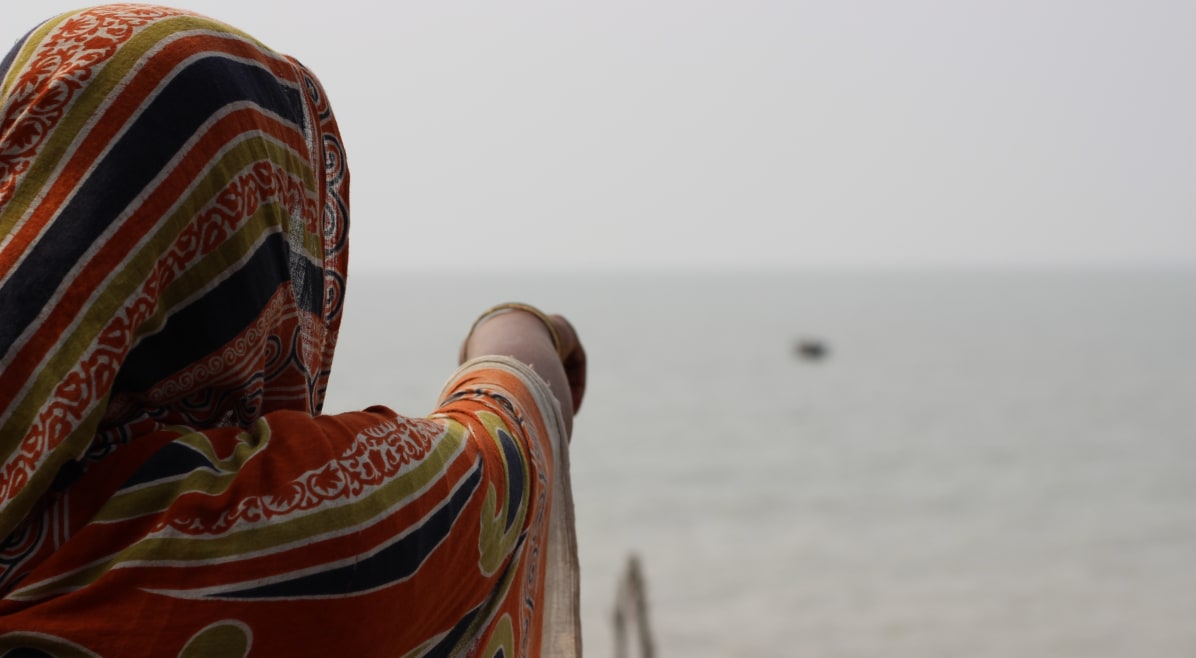 They used to own farming land, but it was ruined by salt water before being completely submerged. The freshwater fish they rely on have become scarce. "The water has been salty for the past five months," her husband Japorsha explained. "This happens every year."

The local government has asked the families along the water's edge to move. "But it's not just a question of these 200 families, but all 40,000 people of the village," he said. "Where would we all go?" The administration hasn't offered to relocate them anywhere, he added.

Most of the land in the Sundarbans is privately owned and does not belong to the government, Paul, the World Bank specialist, explained. "[People] are recognised because most of them have land," he said, "but that recognition is not of great help because even if their land is under water there is no policy in place [to relocate them]."

But Japorsha said he wasn't scared to live in the Sundarbans—despite the impending storms and slowly eroding coastlines. "There is no point [in being scared]," he said. "There's nowhere to go."

Since the 1970's, the risk of displacement after extreme weather events has doubled worldwide, according to the Internal Displacement Monitoring Centre, a UN-recognized humanitarian organisation. Around 25.4 million people are displaced every year due to disasters, recent estimates show. The figures don't include displacement from the other effects of climate change, like rising sea levels, drought and land degradation. In the aftermath of a disaster, basic necessities for women like sanitary napkins, baby food for young mothers, and safe areas to live are often overlooked. Their vulnerability to sexual violence also increases. 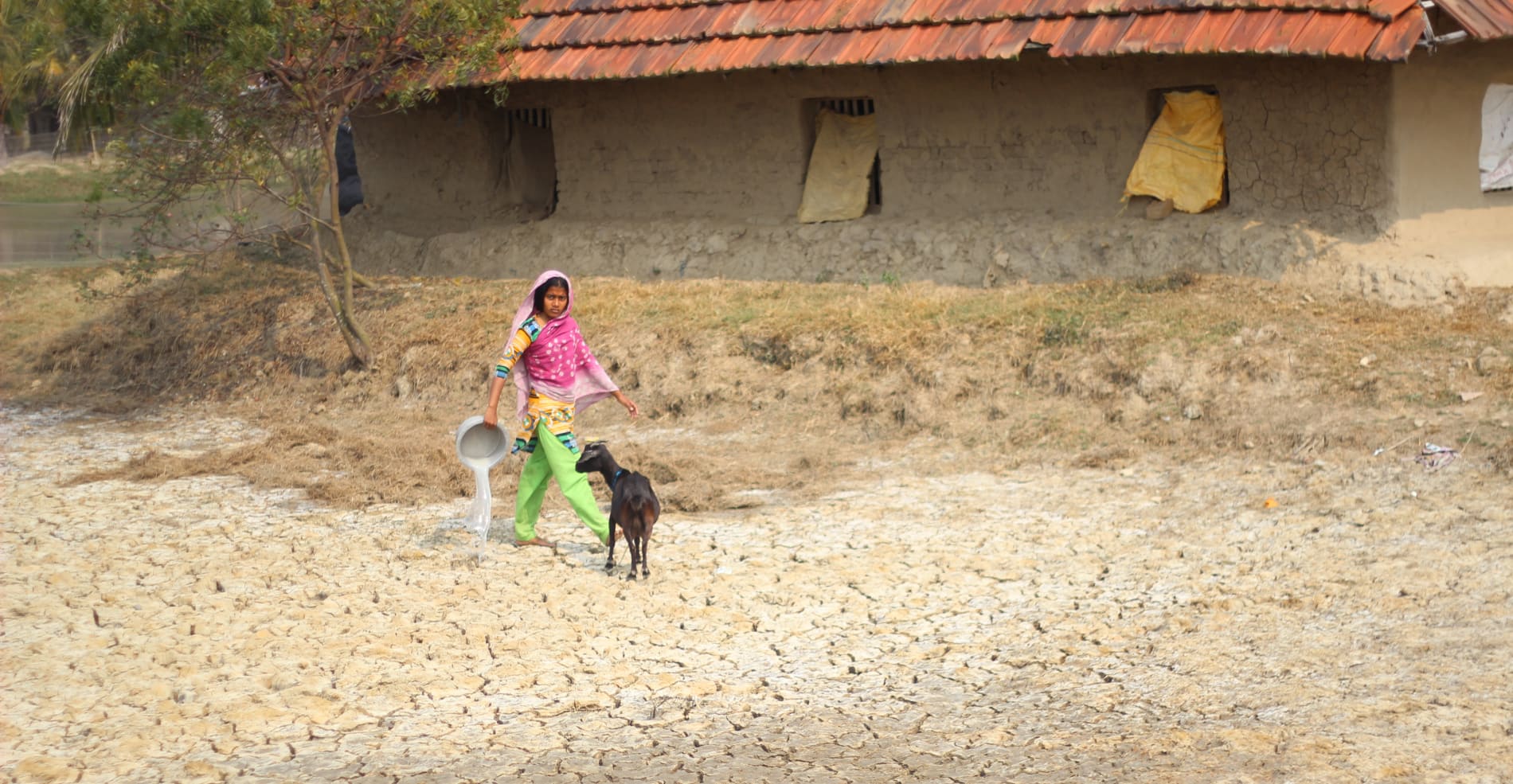 At the international level, migrants displaced by climate-related events have no legal recognition. The 1951 Geneva Convention for refugees doesn't define or even mention the term "climate refugee." Without a concrete definition or acknowledgement of their existence, governments and international aid organizations are far less likely to step in to help.

"These are the people that fall through the cracks," said Paula Banerjee, the chair of the Mahanirban Calcutta Research Group on forced migration.

People displaced from the Sundarbans often end up in the slums of big cities like Kolkata, home to about 4.5 million people, where they live without legal recognition or rights. Many struggle to find work.

Dipali's transition into sex work was gradual. "I would work with him (the foreman) during the day, then have sex with him later. I would get perhaps ₹20 (about 30 cents) or so and be able to buy some rice, lentils." Soon, everywhere she would go seeking a job, she would say, "I am willing to do whatever work there is for me. I have children to feed so I am ready for anything."

She began frequenting Kolkata's red light district, Sonagachi. She would agree to go to a car, a hotel that rented by the hour, anywhere. The money she earned went towards food for her family, a small rented home, and schools for the kids.

At home, she told her mother and her kids that she was working in a hospital. She was almost found out on multiple occasions. Once, her elder sons tried to visit her at the hospital she said she worked in. When they told her they hadn't been able to find her, she pretended that she was sent out of the hospital on errands. Another time, when her mother found condom packets in her bag, she claimed they were big "capsules" she distributed during emergencies. "She believed me, because she didn't know what condoms were," Dipali said. 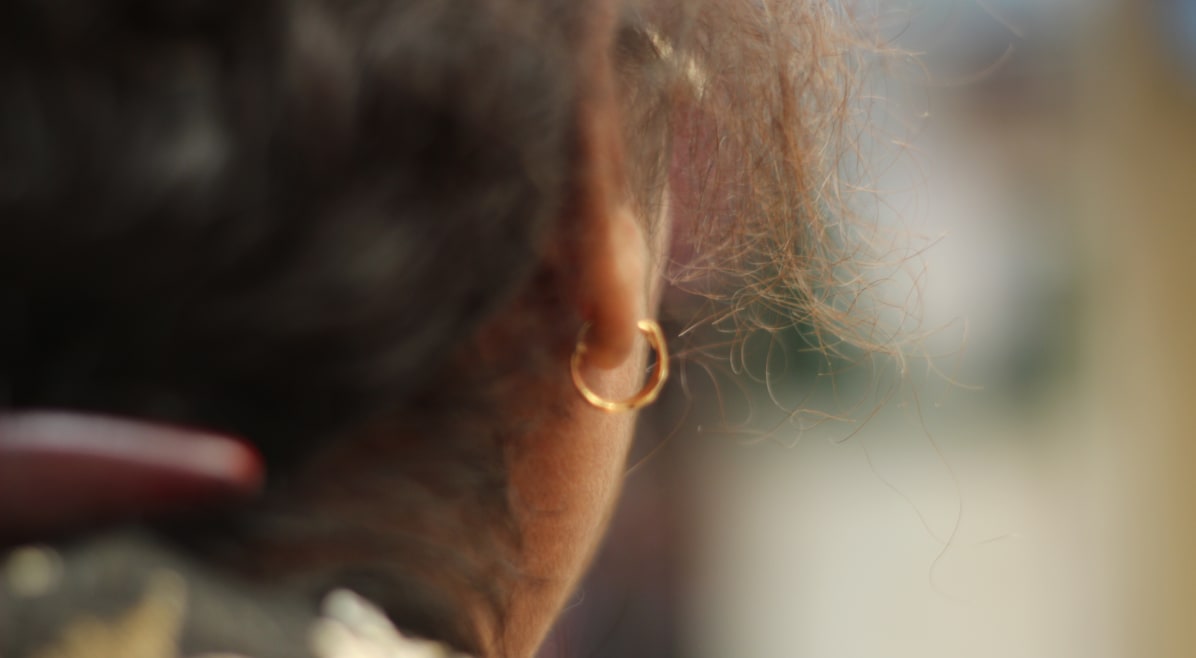 Her elder sons eventually figured out what she was did for a living, and drifted away, making excuses. Only her youngest—the twins—have stuck by her. While the son, who failed in high school, now supports her by working in a factory, her daughter is heading to college later this year. She will need more money to support her education, but Dipali wants her daughter to do better than her.

Dipali often returns to her village to visit her old home. Each time, she repairs bits of it with mud and straw she collects from the now barren fields. It's a futile exercise. It always breaks down in the next flood, the next rain.

But she refuses to surrender the only home she has ever known to the ever-rising waters. She was born there, and was married in the same neighbourhood. Her family had weathered many storms, including the 2004 tsunami, but they had always survived. She knows she can never return. "There's no use even wanting to go back," she said. "Even my children now fear water and never want to go live near it again."

"Sometimes," she said, "I just stand there and cry."

Please check out our instagram page for more information.
This project was supported by the Earth Journalism Network.